Floor coverings have been in use throughout the ages, whether they are flat woven or have a pile weave.  Both forms were in use in Persia, but the focus today is on the knotted pile carpets.  These carpets can be made of silk, wool, or cotton and can be made on either a vertical or horizontal loom.

The most familiar design of a Persian rug is composed of a medallion in the center and borders surrounding that center.  Both the medallions and the borders can have geometric, floral, or even human and animal figures.  An extant persian carpet, shown below, housed at the Metropolitan Museum of Art (accession #10.61.2) shows many such designs.  This carpet has multiple borders around the edges of the carpet, but the center is composed of a repeated pattern of lions attacking multiple other animals.

The loom is made of two horizontal bars and two vertical bars.  The Warp is wrapped around the vertical bars as seen in the figure below.  A shed stick is passed under every other warp string.  Heddles are then wrapped around the warp threads that are under the shed stick and attached to the heddle rod.  The combination of the shed stick and the heddles allow a space, called a shed, to be formed.  This shed is where the warp threads will be passed through to make the base of the carpet. 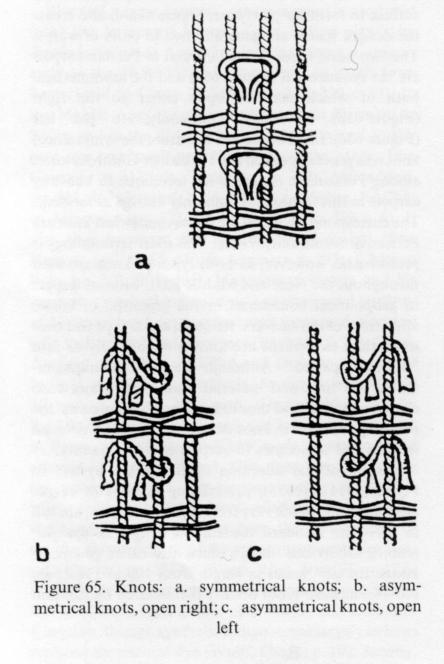 Putting it all together

The process of making the carpet includes warping, weaving and then finishing the edges.  The warping process has already been described in the loom section.  The weaving starts off with multiple passes of the weft thread through the shed at the base of the loom to secure the bottom edge of the carpet.  After the bottom edge is secured, a row of knots will be tied onto the warp threads, leaving the two outermost warp threads empty.  Between each row of knots, the weft thread is passed through the shed two times to secure the knots.  The pile threads are then trimmed to an even length.  After all the knots have been added, the top edge of the carpet is then finished with multiple rows of flat weaving.  The side edges are then finished by overcasting the two outermost warp threads down the length of the carpet.  The carpet is then cut off the loom and the loose warp threads are then tied and may be turned into fringe.

Also here are more resources that I need to investigate more.

Eagleton, William. 1988. An introduction to Kurdish rugs and other weavings. Buckhurst Hill: Scorpion.

Flury-Lemberg, Mechthild. 1988. Textile conservation and research a documentation of the textile department on the occasion of the twentieth anniversary of the Abegg Foundation. Bern: Abegg-Stiftung Bern.

This is a text widget, which allows you to add text or HTML to your sidebar. You can use them to display text, links, images, HTML, or a combination of these. Edit them in the Widget section of the Customizer.
Loading Comments...
%d bloggers like this: